Namdonga is a revenue village under 2 no khata village panchayat of Pub Nalbari development block of Nalbari district. The village is populated by around 140 Household, which is spatially divided by the Pagladia river (tributary to Brahmaputra river), almost 80 % of the demography of the village, which is comprised of various communities dependent on agriculture. In this village, Gramya Vikash Mancha, a registered non-government

voluntary organisation is implementing a project titled “Mahila Kishan Shasaktikaran Pariyojana” (MKSP) with support from Ministry of Rural Development, GoI, under which women farmers of the village are unified in a common platform to promote better livelihood options for the needy and deprived women of the village.

Under the project various programs such as agricultural skill development program, exposures to advanced agricultural technology, demonstration units and systematic investment etc. are taken up with an aim to improve the socioeconomic condition of the women. To promote the village as an organic village women farmers are made aware on the organic technics of agriculture, as a result of which Akhirbad Village Organisation (VO) of the village

constituting of 100 women applied for 50 vermi units under IBS Scheme of MGNREGA to the Gram Sabha on 15th August, 2016. Succeeding to it, DRDA and District Administration, Nalbari sanctioned Rs. 4,50,000 against the applied 50 vermi units where each beneficiary received Rs. 9000 for constructing and promoting vermi units. 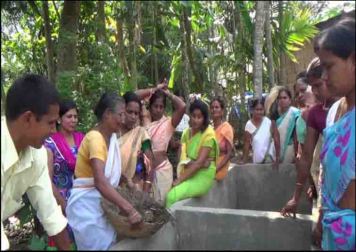 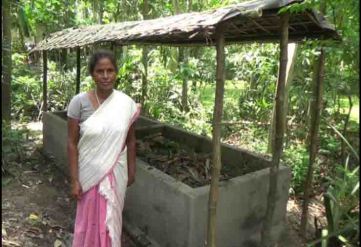 their unit by supplying the needed organic waste and other requirements of the vermi units. These functioning vermi compost units in the village is now expected to ensure Rs. 10000-15000 additional income per annum to each of the beneficiaries covered under the scheme which will induce around Rs. 750000 per annum to the backward economy of the village. In this livelihood promotion process, MGNREGA is successfully implemented in the village and promoted the village to an organic village with participatory support from the deprived women of the village, PRI members, District Administration and voluntary organisation such as GVM.

These successful models are replicated in other adjacent villages to promote organic farming and enhance women participation in Gram Sabha of other villages.This success story recalls for the successful convergence of MGNREGA under NRLM in near future too.

Gramya Vikash Mancha (GVM) is a non-profit organization working with the excluded Section of society in rural areas of Assam with a vision “To create a peaceful, Prosperous, egalitarian and exploitation free society in every village”. The organization has been working with a mission “to empower rural community, particularly underprivileged and women to take control over social institutions, thereby create a society where these people can live with dignity. This is being achieved through creating opportunities for gainful self employment, enhancing social justice, peace, progress and sense of brotherhood.” GVM was registered under Society registration Act XXI of 1860 on the 14th day of September, 2000 in Guwahati. Besides, the organization has Registration under FCRA, 1976 and has of all legal formalities under Income tax Act, 1961. Main supporting agencies of the organization are, Sir Dorabji Tata Trust, Sir Jamsetji Tata Trust, Actionaid India, National Foundation for India, National Council of Rural Institute, Child rights and You, MoRD, NABARD, UNICEF, IGSSS, FADV, NEDFi etc. The organization has been actively working in Nalbari, Kamrup, Barpeta and Baksa district of Assam. View all posts by gvm editor